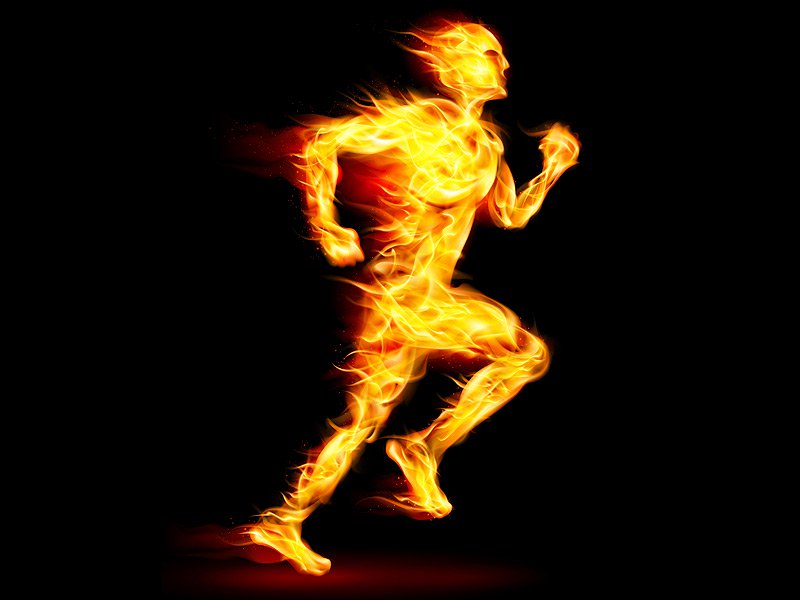 In anabolism, small molecules are changed into larger, more complex molecules (proteins, carbohydrates and fats). Anabolism requires the input of energy, in the form of food calories, and is the process by which the body stores energy. (2)

In catabolism, cells break down those large molecules to release energy. This energy release provides fuel for anabolism. In this way, anabolism and catabolism exist in balance. (3)

Now that we understand at least a simplified version of our complex metabolic process there are still many myths about our metabolism lingering among us that need to be cleared up.

Myth 1: Our metabolism is controlled by genetics and can’t be changed.

What’s burning this energy while the body is resting? (Muscle) Muscle tissue is about 8 times more metabolically demanding than fat. A higher percentage of lean body mass or (muscles) results in a higher metabolism compared to individuals of the same weight with a lower percentage.

Therefore increasing your muscle mass will lead to the body burning more energy, which in turn will raise the body’s BMR. So even if a slow metabolism is in your genes, you don’t have to live with it.

In large this is untrue. Men usually have more lean muscle than women and also have larger organs. This equates to a higher metabolic burn for men even at rest. Because muscle is the physical place where calories are burned for energy the more muscle mass you have, the more calories you burn.

On average, men have a 10 percent higher BMR than women. Also, due to different hormonal balances, women usually carry an extra layer of subcutaneous fat on their body. Additionally, as we age our metabolism starts to decline. But this isn’t completely a function of age but more a result of muscle deterioration due to physical inactivity and lack of proper nutrient intake. This can result in a biological shift toward a higher body fat level even if one’s at a healthy BMI which is known as sarcopenia. (4)

In spite of the age factor, men maintain muscle density longer than women, and so as a woman’s metabolism may start to decline in her late thirties, a man’s will stay actively higher for up to a decade longer.

Myth 3: Spices, foods, and green tea will speed up your metabolism

Unfortunately, there are no foods or drinks that have the ability to permanently speed up your metabolism. Despite this, some spicy foods do have the ability to increase your metabolism, but the boost won’t last long before it goes back to where it started. The same is true of green tea, which is noted for its wealth of antioxidants: Any spike in your metabolic rate will be merely a spike and not a permanent change. This gives some clues that in spite of the quick spike in your metabolic rate this will not affect overall metabolism in a noticeable way over the long haul. (5)

So what can you eat to truly raise your metabolism? The true secret lies in a “well balanced diet” consisting of a higher protein intake.

Protein is the ultimate pro-metabolism food. Red meat, poultry, fish, eggs, nuts and seeds are all great choices. Your body breaks down proteins into amino acids, which the body uses to maintain muscles, blood, and body organs, all of which help keep your metabolism in check.

Protein is also much more difficult for the body to break down than carbohydrates or fat requiring 25 to 30 percent more energy for digestion. This means that in the process of breaking down protein-packed foods, the body is expending a lot more energy to do so, which ultimately leads to an increased metabolism over the long run. (6, 7)

Myth 4: Eating one big meal per day will boost metabolism

This is a topic that is getting a lot of attention now days. Despite the controversy, in my opinion, eating smaller more frequent meals concentrating on whole foods, high in protein with minimal processing is by far your best choice. Why? Because when you skip meals or go through prolonged periods without eating you ultimately coax your thyroid to make metabolic shifts in order to conserve energy. Repeated bouts of this will eventually slow your metabolism permanently. Without a steady supply of sufficient nutrients, cells will readjust and begin to function on smaller amounts of energy, which they can do only by storing more fat in anticipation of these periods of nutrient deprivation.

Also eating frequently keeps your blood sugar more stable reducing craving. This more consistent nourishing is much healthier for the body due to its more steady supply of crucial vitamins and minerals. Another huge plus in eating frequent meals is you will be less likely to end up ravenous which can put you in a position to make poor nutritional choices. (8)

The best plan of attack is to eat small, high-protein based meals consistently throughout the day. This way your body’s energy supply will be constant – steadily converting food into energy, which means your metabolism will be working harder overall, heightening your BMR.

Myth 5: Everything you eat after 7 p.m. turns to fat

The premise behind this myth is that since you’re presumably sleeping a few hours after 7, you can’t be burning energy therefore if you’re not burning energy you must storing energy which essentially means you’re gaining weight. Eating after a certain time does not automatically mean that you are going to store that food as fat. Although your metabolism slows down while the body is sleeping it never stops working entirely. (9)

One of the main reasons that the logic behind this myth became so popular is it became an easy way to control late night binging. If you’re hungry you should eat, no matter what the clock says, and just be conscious of the types of foods you’re choosing. Eating high-sugar foods or carb-dense foods before bed will be a sure way to pack on some unwanted fat pounds while eating a high protein snack will actually help stoke your metabolism.

Key points to raising your metabolic rate and increasing your BMR