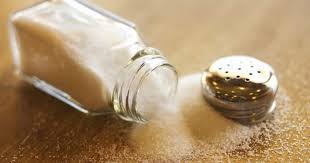 Can Salt Make You Gain Weight

Sodium is a nutrient that’s essential to life. It’s needed for many bodily processes, including fluid and blood pressure regulation, nutrient transport, and nerve cell function. (1)

And while sodium is a necessary mineral, most people consume too much sodium in the form of sodium chloride or table salt.

Eating high amounts of added salt could increase your risk of health issues, such as having a stroke or developing a heart condition or autoimmune disease. (2)

Additionally, you may wonder whether sodium makes you gain weight.

In this article we will be focusing on sodium intake and weight gain.

Many people associate excessive salt in the diet with fluid retention.

This is because eating a lot of salt causes your body to conserve water. (3)

However, your urine volume does not change, meaning this extra fluid stays in your body.

Therefore, a sudden increase in sodium intake may cause you to gain some weight in the form of fluid.

This is why some people report feeling puffy after eating really salty foods like take-out food or many restaurant meals.

It’s important to note that this fluid retention is generally only temporary. Body fluid levels typically return to normal after a few days.

However, while some studies show that increased salt intakes drive fluid intake, others have not shown this association.

For example, a small study found that although a high salt diet led to weight gain and body water conservation in 10 healthy men, higher salt consumption was not associated with increased fluid intake.

In fact, the study found that a 12-gram daily salt intake led to reduced fluid intake. (5)

The relationship between dietary salt intake and fluid balance is complex. More research in this area is needed to understand better how high salt intake may affect your body’s fluid levels. (6)

Foods that are high in salt are also often high in calories.

Eating too many foods that are high in salt and overall calories may lead to weight gain.

Additionally, studies have found that high sodium intake may increase the risk of obesity — independent of your calorie intake.

The study also found that a 1-gram per day increase in sodium intake was associated with a nearly 30 percent increased risk of obesity. (7)

Both of these studies found that sodium intake was associated with weight gain and obesity, even after adjusting for total calorie intake and other confounders like activity levels.

Although the possible mechanism isn’t entirely clear, a high salt diet may directly lead to fat accumulation in the body.

Ways to cut back on added salt

For most people, the sodium found naturally in foods like eggs and shellfish isn’t an issue. However, it’s important to monitor your added salt intake to ensure that your diet isn’t excessively high in salt.

Typically, most added salt intake comes from the consumption of highly processed foods.

Here are some high salt foods to cut back on to reduce your intake of added salt:

Additionally, adding too much salt to home-cooked meals can significantly increase your overall salt intake.

Try reducing the amount of salt you add to foods, and be sure to taste foods before adding extra salt.

You can also use lemon juice, fresh herbs, garlic, and spices to reduce the need for salt in your recipes.

Eating too much sodium in the form of added salt has been associated with weight gain.

Some studies suggest that eating a large amount of salt could lead to short-term weight gain due to fluid retention, while others have found that high salt intake may increase your risk of weight gain and obesity.

Plus, eating high amounts of salt may harm your overall health and increase your risk of developing a medical condition like heart disease.

To maintain a healthy sodium intake, try cutting back on foods known to be high in salt and reducing your use of table salt when cooking at home.