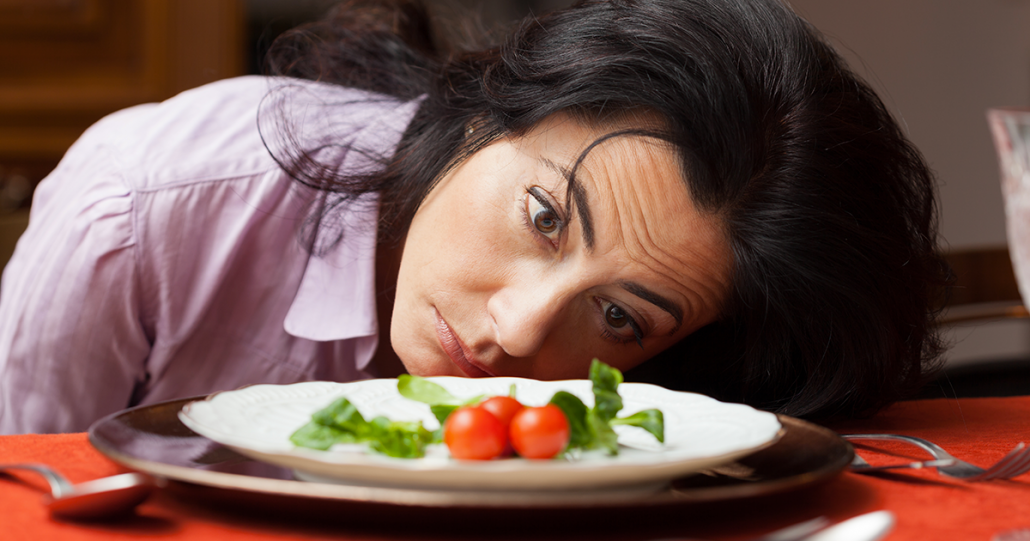 7 Signs You May Be Under Eating

Achieving and maintaining a healthy weight can be challenging, especially in a modern society where food is constantly available.

However, not eating enough calories can also be a concern, whether it’s due to intentional food restriction, decreased appetite or other reasons.

Unfortunately, under-eating on a regular basis can lead to a number of mental, physical and emotional health issues.

Here are 7 signs that you may not be eating enough.

Calories are a measure of the units of energy your body uses to operate. However, when you don’t eat enough of them you’re likely to feel tired most of the time.

Restricting intake to fewer than 1,000 calories daily can actually slow down your metabolic rate and lead to fatigue since you’re not taking in enough calories to support even the basic functions that keep you alive.

Eating too little has particularly been linked to low energy levels in older people, whose food intake may decrease due to reduced appetite. (1)

Studies in female athletes have found that fatigue may occur when calorie intake is too low to support a high level of physical activity. This seems to be most common in sports that emphasize thinness, like gymnastics and figure skating. (2, 3)

Even light physical activity like walking or taking the stairs may cause you to tire easily if your calorie intake is well below your needs.

Conclusion: Eating too few calories can lead to fatigue due to insufficient energy to exercise or perform movement beyond basic functions.

Being hungry all of the time is one of the more obvious signs that you’re not eating enough food, especially the right types.

Studies confirm that appetite and food cravings increase in response to drastic calorie restriction due to changes in levels of hormones that control the neuroregulation of appetite (hunger and fullness). (4, 5, 6)

One three-month study followed mice that were fed a diet containing 40 percent fewer calories than usual. Finding show that their levels of the appetite suppressing hormones, leptin and IGF-1, decreased, and hunger signals increased significantly. (7)

In humans, calorie restriction may cause hunger and food cravings in both normal-weight and overweight individuals. In fact, in a study of 58 adults, consuming a 40 percent calorie-restricted diet increased hunger levels by nearly 20 percent. (8)

What’s more, low calorie intake has been shown to increase production of cortisol a stress hormone that has been linked to hunger and an increase accumulation of belly fat. (9, 10)

Essentially, if your calorie intake drops too much, your body will send signals that drive you to eat in order to avoid potential starvation.

Conclusion: Undereating can cause hormonal shifts that increase hunger in order to compensate for inadequate calorie and nutrient intake.

3. Feeling Cold All the Time

Your body needs to burn a certain number of calories in order to create heat and maintain a healthy, comfortable body temperature. Therefore, if you are constantly feeling cold, not eating enough could be the possible cause.

In fact, even mild calorie restriction has been shown to lower core body temperature.

In a six-year controlled study of 72 middle-aged adults, those who consumed an average of 1,769 calories daily had significantly lower body temperatures than the groups who consumed 2,300–2,900 calories, regardless of physical activity. (11)

In a separate analysis of the same study, the calorie-restricted group experienced a decrease in T3 thyroid hormone levels, whereas the other groups did not.

T3 is a hormone that helps maintain body temperature, among other functions. (12, 13) In another study of 15 obese women, T3 levels decreased by as much as 66 percent during an eight-week period in which the women consumed only 400 calories per day. (14)

Overall, the more severely you slash calories, the colder you’re likely to feel.

Conclusion: Consuming too few calories can lead to a decrease in body temperature, which may be due in part to lower levels of T3 thyroid hormone.

Sleep deprivation has been found to lead to weight gain and even insulin resistance in dozens of studies. (15) In addition, while overeating may cause difficulty sleeping, it appears that strict dieting can lead to sleep problems as well.

Animal and human research has shown that starvation-level calorie restriction leads to sleep interruptions and a reduction in slow-wave sleep, also known as deep sleep. (16)

In one study of 381 college students, restrictive diets and other eating problems were linked to poor quality sleep and negative mood. (17)

In another study of 10 young women, four weeks of improper dieting led to greater difficulty falling asleep and a decrease in the amount of time spent in deep sleep. (18)

Feeling as though you are too hungry to fall asleep or waking up hungry are major signs that you’re not getting enough to eat.

Conclusion: Undereating has been linked to poor quality sleep, including taking longer to fall asleep and spending less time in deep sleep.

If little things have begun to set you off, it could be related to not eating enough.

Irritability was one of several effects experienced by young men who underwent calorie restriction as part of the Minnesota Starvation Experiment during World War II. (19) These men developed moodiness and other symptoms while consuming an average of 1,800 calories per day, which was classified as “semi-starvation” for their own calorie needs. However, your own needs may be different, of course.

A more recent study of 413 college and high school students also found that irritability was associated with improper dieting and restrictive eating patterns. (20)

To keep your mood on an even keel, don’t let your calories drop too low.

Conclusion: Prolonged low calorie intake and restrictive eating patterns have been linked to irritability and moodiness.

Infrequent bowel movements may be related to inadequate calorie intake. However, this shouldn’t be surprising, since consuming less food will result in less waste in your digestive tract.

Constipation is typically described as having three or fewer bowel movements per week or having small, hard stools that are difficult to pass. This is very common in older people and can be worsened by poor diet.

One study of 18 older adults found that constipation occurred most often in those who didn’t consume enough calories. This was true even if they got plenty of fiber, often considered one of the most important factors for proper bowel function. (21)

Restrictive dieting and eating too little food may also cause constipation in younger people due to a slowed metabolic rate. In fact, in a study of 301 college-aged women, the strictest dieters were most likely to have constipation and other digestive problems. (22)

If you’re having problems with regularity, it’s important to take a look at the amount of food that you’re eating and evaluate whether you’re getting enough.

Conclusion: Strict dieting and under-eating can lead to constipation, partly due to fewer waste products to form stool and slower movement of food through the digestive tract.

Although dieting itself may lead to moodiness, intense anxiety can also occur in response to very low calorie intake.

In a study of more than 2,500 Australian teens, 62 percent of those who were classified as “extreme dieters” reported high levels of depression and anxiety. (23)

Anxiety has also been recorded in overweight people who eat very low-calorie diets. In fact, in a controlled study of 67 obese people who ate either 400 or 800 calories per day for one to three months, roughly 20 percent of people in both groups reported increased anxiety. (24)

To minimize anxiety while trying to lose weight, make sure you’re consuming enough calories and eating a healthy diet that includes plenty of fatty fish and other healthy fats to ensure that you’re getting an ample supply of omega 3 fatty acids, which have been shown to help reduce anxiety. (25)

Conclusion: Very low calorie intake may lead to moodiness, anxiety and depression in teens and adults.

Although overeating increases the risk of developing health problems, under-eating can also be problematic.

This is especially true with severe or chronic calorie restriction. Instead, to lose weight sustainably, make sure to eat at least 1,200 calories per day.

Additionally, be on the lookout for the 7 signs outlined here that can lead to clues that you may be in need of more food than you’re currently taking in.