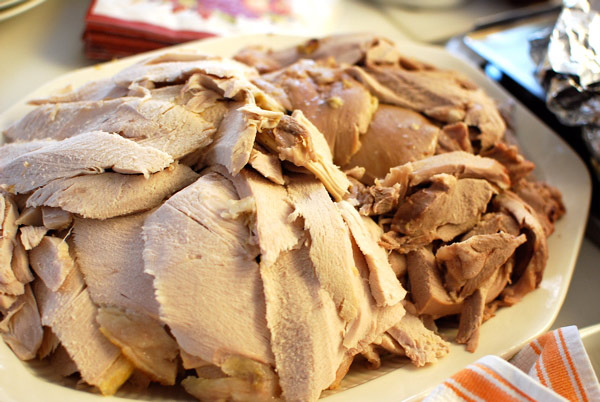 The white meat of chicken and turkey has been stamped as a go to health and weight loss food for many decades.

In fact, because white meat has about half the saturated fat of dark meat and is ounce for ounce lower in total calories, many health advocates and practitioners push it as the healthier alternative due to outdated health beliefs.

Many U.S. doctors recommend eating white or light meat instead of dark meat, because it is lower in saturated fat, which has been vilified since the 1970’s.

However, although white meat may be lower in fat and calories, dark meat actually contains many more valuable nutrients, which has merits above and beyond its white meat counterpart.

Additionally, if you are eating free-range, organic turkey or chicken the fat is even healthier, providing major benefits for your skin, joints and immune system because its higher in omega 3 fats.

It has to do with how much the bird’s particular muscles are being used.

Since chickens and turkeys, especially free-range, use their legs to move around and generally don’t fly or use their wings much, their thighs are dark.

This is because of a compound in the blood that results from the movement of the muscles. The more movement, the darker the muscle.

Dark meat contains myoglobin, similar to hemoglobin, which is a substance in poultry blood that allows for transport of oxygen necessary for muscle function, recovery and health. (1)

Dark meat is also full of readily available iron, which is then transported and used by our body as well.

Besides iron, dark meat contains more selenium, zinc, vitamins A and K, riboflavin, thiamine, and B6 and B12, as well as a super-nutrient called taurine, which is a sulfur-containing amino acid important in fat metabolism.

Taurine is also an anti-inflammatory nutrient which helps in blood pressure regulation, healthy nerve function and the production of bile acid, which breaks down fat.

In Fact, according to a new study by researchers at the New York University School of Medicine (NYU), taurine significantly lowers the risk of heart disease, reducing mortality by as much as 80 percent, as well as protecting against diabetes and high blood pressure. (2, 3, 4)

Additionally, taurine is such a powerful nutrient that it’s considered a primary nutritional factor for longevity, insulin sensitivity and proper electrolyte balance.

This is why as we age and our bodies naturally slow down the production of taurine it becomes essential to take more in through our diet.

New research is looking at the benefits of taurine for the human brain as well as it may have the ability to slow down age-related loss of memory and cognitive power. (6, 7)

High taurine levels are especially associated with eating the dark meat of chicken and turkey in addition to oysters and clams.

Many people pay extra just to have boneless, skinless chicken or turkey meat, but it’s time to start rethinking that and eat the whole bird to maximum the health benefits!

Additionally, there are a lot of more edible parts to chicken or turkey that go beyond just the meat. In fact, when we strip away the skin, we are stripping away valuable healthy fats and collagen.

Chicken and turkey skin contain a large amount of monounsaturated fat and oleic acid, the same healthy fats found in olive oil, which has anti-inflammatory properties.

In fact, according to Harvard School of Public Health the majority of fat in chicken skin is actually quite heart-healthy. (8)

Another interesting fact is that the skin is almost pure collagen, which is now being touted by many functional health practitioners as one of the most important nutrients we can add to your diet.

Collagen helps fight against diseases like diabetes, improves joint health, speeds up healing time from injuries and athletic performance, reduces wrinkling and sagging skin, and add strength and elasticity to hair and nails.

So, don’t forget to take that chicken or turkey carcass, add water or broth and cook it slowly for 24 hours or more to create your own delicious and health promoting bone broth or soup base full of collagen and glucosamine.

While boneless, skinless chicken and turkey meat are still awesome and delicious, newer nutrition science is now telling us that we shouldn’t disregard eating the whole bird! Yes, that means the dark meat, skin, bones and cartilage.

Trust me, your body will thank you for it!