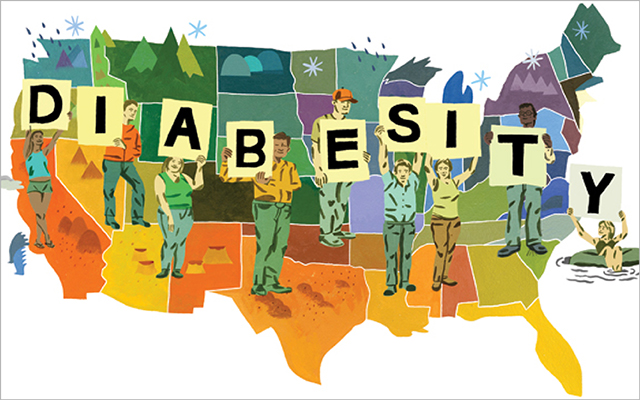 As more Americans find themselves battling with their weight, the amount of chronic disease we’re faced with is paralleling its rise. Today nearly seventy percent of our adult population is now considered overweight, and over one third are actually deemed clinically obese. (1)

Equally so, childhood obesity has risen from a mere 4 percent just twenty five years ago to now over 30 percent and growing rapidly as well. (2, 3)

While all of this unfolds, very few experts seem to be focusing their efforts on solutions that have the ability to combat, or reverse, this already runaway train.

Back in 1982 the American Medical Association (AMA), American Heart Association (AHA) and the USDA put out new dietary guidelines for Americans. The guidelines recommended that Americans reduce the total percentage of fat in their diet from 40% to 30% in an effort to combat heart disease and the growing obesity epidemic. (4)

Over the course of the following ten years we indeed achieved lowering our total consumption of fat to 30%. This has been clearly pointed out by Dr. Robert Lustig, renowned Pediatric Endocrinologist and Professor of Clinical Pediatrics at the University of California, San Francisco (UCSA) in many of his reports, yet heart disease and obesity continued to skyrocket.

By the year 2000 we were in a full blown epidemic that Dr. Mark Hyman has now labeled Diabesity.

Americans are now some of the sickest and most over-weight people in the world, leading in obesity and metabolic syndrome (a cluster of inter-connected disorders that puts us at a high risk factor for Heart Disease and Diabetes). Yet our focus is continually turned toward things like, Tobacco, Alcohol and Gun Control, even though poor diets kill more Americans, every single year, than all three of those issues combined. (5, 6, 7)

There is now insurmountable evidence, all pointing in the same direction as to the causes of the chronic issues we’re now being plagued with, yet the Processed Food Giants, Big Agribusiness and Big Pharma all turn the other way, knowing it will cost their bottom-line billions to come clean and change the damage already done.

As we look over the landscape of our past, the future certainly doesn’t look any brighter. For the first time in recorded history the lifespan of our future generation is deemed shortened by as much as ten years.  Yes, our life expectancy is actually declining, making it clearly evident that what’s at hand as our so-called solutions aren’t working, and indeed, are not solutions but rather a mere bandage for a mass epidemic, so large, most can’t even comprehend it. (8, 9)

Although, not our personal fault, due to the misinformation and lack of education provided by our so called “trusted resources”, there is only one clear path to recovery from what is now the largest social epidemic we’ve every experienced in modern history.

We must change the relationship we have with the processed, man-made creations that have now become the (staples) in our everyday modern diet, and use a new (real food) approach as the catalyst to eat our way out of the very epidemic that we’ve eaten our way into.