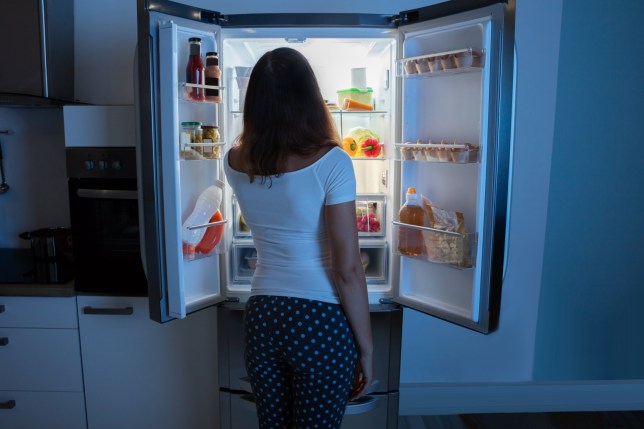 Does Eating at Night Lead to Weight Gain?

Many people worry about gaining weight when eating later than a particular time.

One common suggestion is to not eat after 8pm, but advice about eating at night is misleading.

In reality, what you eat is much more important than whenyou eat.

In this article we’ll separate fact from fiction when it comes to late-night eating and weight gain.

The idea that eating at night makes you gain weight stems from animal studies, which suggest that the body may use consumed calories differently past a certain time of day.

Some researchers hypothesize that eating at night goes against your circadian rhythm, which is the 24-hour cycle that tells your body when to sleep, eat and wake. (1)

According to your circadian rhythm, nighttime is for resting, not eating.

Indeed, several animal studies support this theory. Mice that eat in opposition to their circadian rhythm gain significantly more weight than mice that only eat during waking hours, even if they eat the same amount of food. (2, 3, 4)

However, not all studies in humans support this notion.

In fact, studies in humans indicate that it’s not necessarily the time you eat, but how much you eat that matters. (5, 6)

For example, a study in over 1600 children found no link between eating dinner past 8 p.m. and excess weight. In this study, late eaters did not appear to consume more total calories. (7)

However, when researchers tracked the eating habits of 52 adults, they found that those who ate past 8pm consumed more total daily calories than earlier eaters. Because of this, weight gain would be possible over time. (8, 9)

Therefore, overall, when your total calorie intake falls within your daily needs, weight gain does not appear to happen merely as a result of eating at night.

One explanation for the association between eating at night and weight gain is the tendency for late eaters to eat more calories overall.

Regardless of timing, eating more calories than you need will lead to weight gain.

For example, researchers looked at the relationship between meal timing and total calorie intake of 59 people. Notably, individuals who ate closer to their bedtime ate more calories overall than those who ate their last meal earlier. (10)

Another study found that people who ate between 11 p.m. and 5 a.m. consumed roughly 500 more calories per day than those who limited their intake to daytime hours. Over time, the average nighttime eater gained 10 more pounds. (11)

Thus, eating at night may lead to weight gain only if you eat a surplus of calories.

Not only do late eaters tend to eat more food, they often make poorer food choices as well.

At night, you may be more likely to choose unhealthy, calorie-dense foods. These are foods with little nutritional value, such as chips, soda and ice cream.

There are many possible reasons for this. For one, late-night eaters may not have easy access to healthy food.

People who work night shifts are a good example of this. Many studies suggest that night-workers tend to snack on unhealthy foods for convenience, as there may be a lack of healthy options available in the workplace at night. (12)

Emotional eating is another factor leading to poorer food choices at night. It’s important to discern between true hunger and eating due to stress, anxiety, boredom or sadness. (13)

Furthermore, tiredness has been linked to increased food intake and a desire for high-calorie foods. This is may be due to hormonal changes that influence appetite during sleep deprivation. (14, 15)

Again, when it comes to weight gain, what you eat matters more than when you eat. If you eat within your daily calorie needs, you won’t gain weight simply by eating at night.

If you’re truly hungry after dinner, consider choosing nutrient-dense foods and beverages. These are lower-calorie foods with high nutritional value.

Some great options include:

Though the total number of calories you eat is what ultimately affects your weight, research shows that there may be ways to regulate your appetite through meal timing and frequency.

For example, multiple studies indicate that eating a higher-calorie breakfast may keep you fuller longer and possibly helping prevent over-eating at night(16).

In one study, people eating a 600-calorie breakfast had lower appetites and significantly fewer cravings during the day than those eating 300 calories for breakfast. Especially cravings for sweets were reduced. (17)

Keep in mind that breakfast may not be necessary if you eat late at night — at least not at the traditional time. Follow your hunger cues and you may find yourself eating your first meal later than usual.

You may also want to consider eating smaller meals more frequently. Some, but not all, studies suggest that this may help you manage your appetite and lessen feelings of hunger throughout the day. (18, 19)

Therefore, changing your meal timing and frequency may be a strategy to reduce overall calorie intake by managing hunger.

You won’t gain weight by merely eating later if you eat within your daily calorie needs.

You may also want to consider eating a higher-calorie breakfast or frequent, small meals, throughout the day to manage appetite and stave off late-night cravings. ntext.