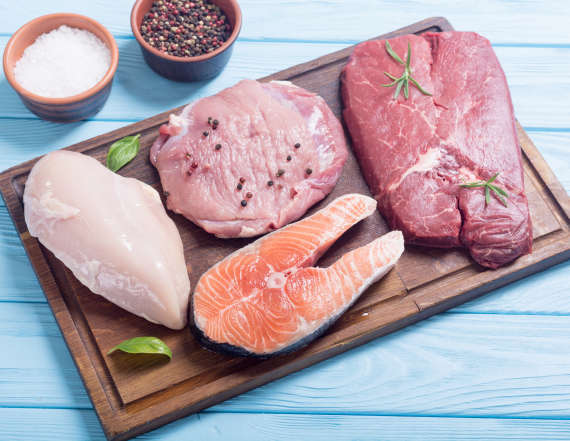 While the practice of eating raw meat is common in many cuisines around the world, is there any safety concerns or precautions you should consider.

In this article we will review the safety of eating raw meat.

When eating raw meat, the biggest risk that you may encounter is contracting a foodborne illness, which is commonly referred to as food poisoning.

This is caused by eating food contaminated with bacteria, viruses, parasites, or toxins. Typically, this contamination occurs during slaughter if the animal’s intestines get accidentally nicked and spread potentially harmful pathogens to the meat.

Common pathogens in raw meat include: (1)

Symptoms of foodborne illness include nausea, vomiting, diarrhea, abdominal cramping, fever, and headache. These symptoms usually present within 24 hours and can last up to 7 days — or longer in certain cases — as the duration depends on the pathogen. (2)

Some common raw meat dishes from around the world include:

These dishes are found on many restaurant menus, but this does not mean they’re safe.

Oftentimes, raw meat dishes will have a small disclaimer that reads, “Consuming raw or undercooked meats, poultry, seafood, shellfish, or eggs may increase your risk of foodborne illness.”

This warns diners that there are risks associated with raw meat intake and that it may not be safe.

Moreover, raw meat dishes can also be prepared at home, though properly sourcing the meat is important.

For example, buy your fish fresh from a local retailer that utilizes proper food safety practices, or buy a high-quality cut of beef from your local butcher and have them grind it specifically for you.

These practices can help prevent contamination and foodborne illness.

Raw meat and their benefits or lack thereof

Though some claim that raw meat is superior to cooked meat in regards to nutritional value and health, there’s limited evidence to support this notion.

Several anthropologists promote the idea that the practice of cooking food, especially meat, has allowed humans to evolve, as cooking breaks down proteins and makes it easier to chew and digest. (3, 4, 5)

Some studies suggest that cooking meat may reduce its content of certain vitamins and minerals, including thiamine, riboflavin, niacin, sodium, potassium, calcium, magnesium, and phosphorus. (6)

However, these studies also note that levels of other minerals, specifically copper, zinc, and iron, increase after cooking. (7)

Any potential benefits of eating raw meat are likely outweighed by the higher risk of contracting a foodborne illness. Still, more data is needed to establish specific nutritional differences between raw and cooked meat.

How to reduce your risk

While eating raw meat is not guaranteed to be safe, there are a few ways to reduce your risk of getting sick.

When indulging in raw meat, it may be wise to choose a whole piece of meat, such as a steak or meat that’s ground in-house, as opposed to prepackaged minced meat.

This is because pre-minced beef could contain meat from many different cows, greatly increasing your risk of foodborne illness. On the other hand, a steak comes from just one cow. Plus, the surface area for contamination is much smaller.

The same concept applies to other types of meat, such as fish, chicken, and pork. Ultimately, eating any kind of raw ground meat is much riskier than eating a raw steak or whole piece of meat.

Opting for raw fish is another way to reduce your risk. Raw fish tends to be safer than other types of raw meat, as it’s often frozen shortly after being caught — a practice that kills a number of harmful pathogens. (9, 10)

On the other hand, chicken is more dangerous to eat raw.

Compared with other meats, chicken tends to contain more harmful bacteria like Salmonella. It also has a more porous structure, allowing pathogens to penetrate deep into the meat. Thus, even searing the surface of raw chicken doesn’t appear to kill all the pathogens. (11, 12)

Lastly, the risk of foodborne illness can be avoided altogether by cooking pork, beef, and fish to a minimum internal temperature of 145ºF, ground meats to 160ºF, and poultry to at least 165ºF. (13)

Raw meat dishes are common on restaurant menus around the world, though this does not mean they’re safe.

The major risk associated with eating raw meat is developing a foodborne illness caused by contamination from harmful pathogens.

There are some ways to reduce this risk when eating raw meat, though to avoid risk altogether, it’s important to cook meats to a proper internal temperature.