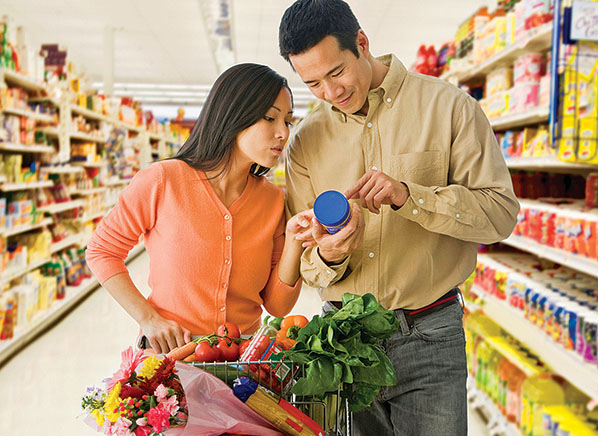 The Dirty Little Secrets Hidden On Our Food Labels

Perhaps one of the most perplexing things we encounter when it comes to buying our food is our understanding of the food label. To be perfectly honest, when it comes to the real world, there is nothing more loaded with confusion and sketchy marketing tactics than the food you buy.

Because of how deeply calories and fat have been ingrained in us as being the most important thing to look at on a food label, most people are probably picking products based on either the amount of calories and fat there is in a serving or by the bold marketing statement slammed across the front of packages, screaming things like “all-natural,” “organic,” “low-fat,” “heart healthy,” “fortified”, “omega-3s enriched”, “ zero trans-fat ”, “gluten free.” All of which tell you nothing about the true quality of that food.

Food marketing experts depend on the fact that most shoppers take less than five seconds to evaluate a product before deciding whether to throw it into their shopping cart or leave it on the shelf. Outside of these instantaneous shopping decisions, most of us don’t even understand what words like “enriched” “reduced fat” or “all natural” truly mean in the world of food manufacturing, yet we assume —because they list it right on the front of the package— they’ve got to be good, otherwise why would they advertise as such.

With the exception of a few more complex regulations, marketing food isn’t really any different from marketing any other product. The fact is most of the marketing claims you see aren’t only misleading, they’re also quite useless. For instance, “Natural” is a term that is only regulated by the government for meat yet because of its portrayed health significance it’s slapped on all kinds of processed foods, from breads and cereals to juices and even soda.

Other terms – like “fortified” or “enriched”- make it sound as if the product is loaded with vitamins, but all these terms really mean is that the product has a mere 10 percent of the recommended amount per serving, a quantity that is essentially meaningless since the recommended value is considerably low to begin with.

So, as you can see, big food has a cunning way of engineering labels to a point of complete confusion. Their ingenious marketing tactics, the exploitation of government loopholes, and the manipulation of serving size and ingredient thinning paints a completely different picture in the eyes of the consumer than what’s really going on.

There are four basic ways food labels are deceiving us
Tweet

There are four basic ways food labels are deceiving us, and what we really need to focus on when reading a food label. Once you become good at identifying these deceptive marketing tactics the rest of the label will become fairly insignificant.

When it comes to favorable opportunities, the government has left a small, yet significant, loophole open for food manufacturers to use to their advantage. It goes like this; As long as a product contains less than 0.5 grams of an ingredient per/serving they are allowed to say zero. So, essentially what this means is that food manufacturers can include up to 0.49 grams of say “trans-fats” in a product and still be allowed to call it trans-fat free or zero trans-fat.

One hurdle that food manufacturers have been faced with is that many of their product’s true serving sizes contain a heck of a lot more than the allowable 0.49 gram threshold. So what do they do to combat this? They conveniently make the serving size smaller.

Note that manufacturers do the same thing with other ingredients like “sugar”. Anything less than ½ gram per/serving is considered “sugar-free,” but trust me, by the time you’ve consumed even a reasonable portion of the food, you’ve consumed way more of its insidious ingredients than you’ve bargained for.

This may not sound like it’s a big deal to a lot of you, but it actually is. You see, some so called “heart healthy” spreads that play the trans-fat trick contained 0.49 grams per/serving, but their serving size has been scaled back to a ridiculously small amount. Anyone adding a reasonable amount of this “healthy” spread to various foods during the course of a day could easily end up scarfing down three or more grams of trans-fats, all while thinking they’re consuming zero.

Manufacturers have been playing the calorie game for a long time as well. Next time you pick up a regular single size bottle of soda, juice, sports drink or one of those nice prepackaged muffins or cookies take a look at the label. If all you quickly glance at are the calories —which is all most of us do—you might think, “Hey this isn’t so bad!” However, when you look at the fine print you’ll see it’s based on calories per serving, and when you investigate further you may be surprised to find that the number of servings per package may in fact be two, three or even four servings. So, that single serving juice or cookie often turns out to be a lot more than you originally thought.

So, make sure when you’re reading labels you check the number of servings the product contains. If it contains 2 servings and there’s 200 calories per serving, then the entire package or bottle contains 400 calories.

Manufacturers often play the calorie system in reverse as well. A loaf of bread that claims to have 25 percent fewer calories per slice may actually be sliced 25 percent thinner than the regular bread. What’s more, the low calorie claim may allow the manufacturers to sell it for a higher price. Even coffee creamers, for example, may contain 30 to 40 percent fat, but by defining a serving size as just one teaspoon, manufacturers can round off the fat to zero, even though one teaspoon of creamer in a cup of coffee would barely change the color much less the taste.

This kind of thing is fairly standard procedure in the world of food marketing and it fools nearly everyone—except it won’t fool you again now that you know what to look for.

The cunning ability manufacturers have to hide what’s really happening with your food is nothing new, it’s actually been going on for a long time. You see, regulations require that food labels list the ingredients in descending order of predominance according to weight. What this means is that the heaviest weighted ingredient needs to appear first on the ingredient list, while the lightest is last.

So let’s say, for instance, a manufacturer doesn’t want the public to know that the most predominant ingredient in a processed product is sugar, instead of using just one type of sugar they’ll use several different forms. All of them are basically the same thing —a sweetening and bulking agent— but by using several different forms, none of them become a predominant ingredient so they can list them much further down on the ingredient list.

Although disguising sugar is one of the easiest examples to understand, this practice is used by manufacturers for many other ingredients including salt and fat.

Padding is when a food manufacturer takes an ingredient—like omega-3s, or synthetic fiber—and adds it to their product during processing so we instinctively presume it’s healthy.

The amount of the “healthy” ingredient that manufacturers add to their food is so miniscule its claims are meaningless. Yet they are legally able to say the product contains the ingredient in question, and they make it very evident by bolding it across the front of their packaging.

Companies commonly pad the ingredient lists with healthy-sounding berries, herbs or superfoods. Some of the most popular add-ons for this kind of deception include omega-3s, synthetic or functional fiber (added to make a product look like its high in fiber) spirulina (a blue-green algae product that’s high in amino acids, vitamins and minerals), L-carnitine (believed to have the ability to increase fat-burning), gingko (to enhance memory), ginseng (for heightened energy) and acai berry and goji berries (promoted for everything from weight loss to anti-aging).

Adding a tiny—albeit meaningless—amount of a healthy ingredient to a food wouldn’t be so bad if the food was good to begin with. The problem is these “healthy” ingredients with the glowing reputation are usually added to foods that are basically junk. Since most people don’t have the time to go through and carefully analyze labels, they make split-second decisions based on what stands out the most.

Manufacturers will often capitalize on name recognition to fool you into buying their products. Blueberries, for example, are well known to be a terrifically healthy food loaded with antioxidants. Unfortunately some big brand food companies that offer blueberry cereals, muffins, pastries and bars have been deceiving us by creating fake blueberries made from artificial colors, partially-hydrogenated oils and high-fructose corn syrup (HFCS).

As you can see the food industry is trying desperately to keep us in the dark as to what’s really going on with our food. The simple fact is we need to stop looking at the calorie and fat content of products, and start focusing on what’s really important namely the ingredients that we’re actually paying for.

Remember, it’s not the calories or fat that will end up being the demise to your weight or your health issues, but rather the quality of the foods you choose that will ultimately decide the destiny of your health.

2. If the ingredients list contains long, chemical-sounding words that you can’t pronounce you should avoid that item. A simple rule is to stick with ingredients that you recognize and can pronounce.

3. Don’t be fooled by fancy sounding herbs or other ingredients that appear really far down the ingredient list. Some food manufacturers include these towards the end of the list as a marketing gimmick on the label. The actual amount is likely to be so miniscule that it’s meaningless.

5. Don’t be fooled by the word “wheat” when it comes to flour. All flour derived from wheat can be called “wheat flour,” even if it is processed, bleached and stripped of its nutrients. Only “whole grain wheat flour” is a healthful form of wheat flour. Many consumers mistakenly believe that “wheat flour” products are whole grain products. In fact, this is not true. Food manufacturers fool consumers with this trick.

6. Don’t be fooled into thinking that brown products are healthier than white products. Brown sugar for instance is a gimmick; it’s actually just white sugar with brown coloring and flavoring added. Brown eggs are no different than white eggs except for the fact that their shells are a different color. Brown bread may be no healthier than white bread, either, unless it’s made with whole grains. These are just gimmicks used by the food industry to fool consumers into paying more for a believed healthier product.

7. Watch out for deceptively small serving sizes. Food manufacturers use this trick to reduce the number of calories, grams of sugar or grams of fat believed to be in a product.

So buyer beware – be fooled no more! Read your labels and put to use the information covered here as you shop for good, truly healthful products.