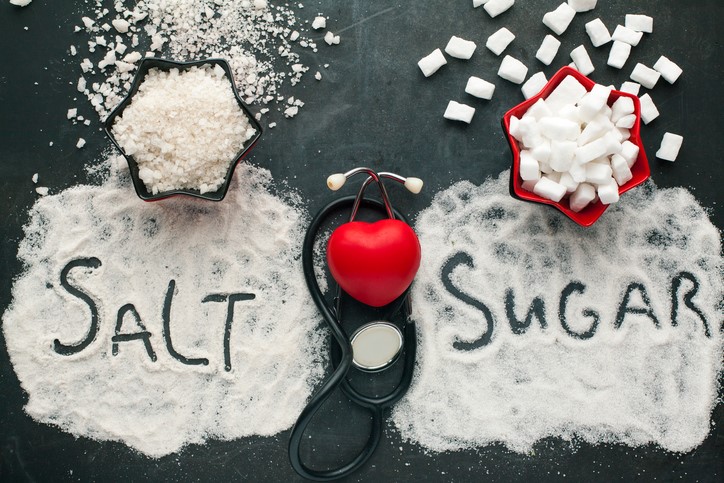 Which One is Worse “Salt or Sugar”

Nearly every substance that we consume can be defined as either a remedy or a poison.

What differentiates between the two is the dose!

So, rather than playing a guessing game when it comes to your health, I’m about to uncover the truth about two substances we consume every single day and which is truly the lesser of these two evils.

The United States Government recommends most adults consume less than 2,300mg of sodium per day.

Furthermore, adults over the age of 50 and/or anyone who has hypertension, diabetes or chronic kidney disease, which is about half of the American population, should limit their intake to 1,500mg per day.

Unfortunately, the CDC estimates that the average sodium intake per person in the U.S. is more than 3,400mg per day. And most of that comes from processed food and restaurant food.

In fact, the FDA breaks down Americans sodium intake like this:

As you can see, a majority of our sodium intake comes from processed foods.

Sodium is not harmful to one’s health and is, in fact, a necessary essential nutrient we must consume for optimal health.

Therefore, the issue of sodium/salt has nothing to do with the nutrient itself. Instead, it lies in the quality of sodium “meaning” sodium used in processed foods versus sodium found in products like Pink Himalayan salt or sea salt, as well as sodium intake relative to total electrolyte and fluid intake.

Meaning, the quality of the sodium matters, as does your intake of all our bodies electrolytes essential for normal function of our cells and organs including:

If you drink ample fluids, eat electrolyte-rich foods and aim to consume natural salt instead of table salt as much as possible, you shouldn’t have to keep a close eye on your sodium intake.

The Journal of Human Hypertension concluded that salt actually HELPS your blood pressure by normalizing it to healthy levels.

In fact, high blood pressure is more likely the result from low levels of calcium, magnesium, and potassium that salt provides you.

In essence, what this is saying is your “lack of salt” is causing your high blood pressure!

But there’s one catch…

Instead, choose natural sea salt and you could actually see your blood pressure drop and quite significantly!

According to the Center of Disease Control and Prevention (CDC), Americans should keep their intake of added sugars to less than 10 percent of their total daily calories as part of a healthy diet.

Therefore, based on a of 2,000 calorie per day, no more than 200 calories should come from added sugars, which is roughly 50g.

This is significantly higher than the American Heart Association (AHA) recommendations, which differ based on gender, suggesting men limit their sugar intake to 150 calories per day or 37.5g and women to 100 calories per day, which is 25g.

The factors which may contribute to the lower recommendations from the AHA may stem from the fact that aside from being a major source of calories that in excess can lead to weight gain, too much sugar can cause accelerated cellular aging and excessive inflammation, both of which can increase your risk for multiple chronic and metabolic health issues.

All sugars, regardless of how they’re labeled, whether it’s (cane sugar, high fructose corn syrup, brown sugar, maltose, dextrose, rice syrup) or the other 56 common types, all have a similar effect on the body by raising blood sugar levels, causing the production of insulin.

Insulin is needed to flush the sugar out of your bloodstream, providing your body with energy. This isn’t necessarily a bad thing, as energy is necessary for our bodies to function properly.

However, when we overload our systems with too much sugar it becomes toxic and quite problematic.

You see, as we are forced to produce excess amounts of insulin, this can in turn make our bodies resistant to insulin, causing us to store fat.

But this isn’t the only drawback to overconsumption of sugar. This stored fat can lead to diabetes, glaucoma, and possible kidney failure.

Fructose is only processed by the liver. Too much fructose can contribute to abnormal cholesterol levels, high blood pressure, fatty liver disease, metabolic syndrome, and heart disease.

Consuming vegetables and moderate amounts of fruit, which contain natural sugars, are perfectly acceptable and encouraged as part of a well-balanced and healthy diet.

Added sugars include any sugars or artificial sweeteners that are added to foods or beverages during processing.

These added sugars and sweeteners can include natural sugars such as honey, agave and lactose as well as other sweeteners such as high fructose corn syrup, which is chemically manufactured.

While it may not be as easy to determine how much sugar is actually in your foods when you are purchasing pre-packaged items, the following is helpful at deciphering the various lingo:

So, which one of these substances is actually worse for you?

Since salt is necessary for your body to function and sugar is not, and since sugar can increase the negative effects of salt in the body, sugar is without a doubt much more harmful to one’s health than salt.